Thought would upgrade late 2012 mac mini with latest and greatest, leaving me with a 'development' mini down the track.

All completed and seems to be almost 100% functional - but certainly needed the 1/2 day that I had set aside!

A few plugins (some of which mine

) stored data in User/Documents/ and Indigo was a sea of red before copied these folders over as well.
(I'll look at updating mine - most of mine is image/storage of plugin generated content, but iRoomba Plugin does store config here

Still had some issues and discovered that Mojave appeared to be using iCloud Documents as default - so User/Documents didn't exist.
Needed to turn iCloud Documents off within iCloud settings - on doing so Documents folder appeared.

Sonos plugin - major repeated exception which couldn't fix.
https://forums.indigodomo.com/viewtopic.php?f=142&t=20655&start=15
This advice of adding try/except appears to have resolved for me.

Few custom wifi serial devices expecting set IP address for Indigo - which needed to update/took a while to track down.

RFXCOM - Small issue with the USB ports.... Couldn't plug it in! They have changed the USB port orientation - and the Gen5 ZWave stick blocks the other port.
Didnt really want to use Hub given previous reports of issues, but found a USB extender cable in 'draw of cables' and using that.
(might be usb1/2 not sure- probably should replace with something newer)

With port extender - plugs in and functioning fine, along with Gen5 stick - no Z-wave issues as yet.

Also then had issues - and found hadn't disabled sleep within Mac - did this and behaviour improved.

So:
1. Check icloud Documents off, and copy any indigo based Documents located files to new mac as well
2. Expect to spend sometime updating plugin config paths/save paths
3. Need a USB Extender if planning on connecting Gen5 Z-stick and anything else to mac!
4, Don't forget to disable sleep

All and all - more difficult than assumed it would be and hopefully a few pointers here for those making the change. (will update if discover anything else)

by Redburga
Thanks for the details on your move to a 2018 Mac Mini. I have a very simple setup: no plugins at this time. My big problem is figuring out how to disable sleep on a 2018 Mac Mini with Mojave. They got rid of the control to stop the computer from sleeping. How did you disable sleep?

Redburga wrote:
Thanks for the details on your move to a 2018 Mac Mini. I have a very simple setup: no plugins at this time. My big problem is figuring out how to disable sleep on a 2018 Mac Mini with Mojave. They got rid of the control to stop the computer from sleeping. How did you disable sleep?

So the Energy Saver preference in System Preferences doesn't look like this for you: 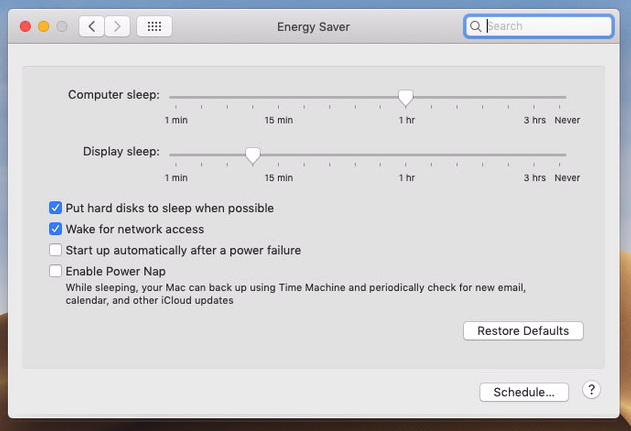 I ask because that's what I see on a 2012 mini running Mojave.

by Redburga
I attached a picture of what my Energy Saver looks like. I found a post on Stack Exchange from a few years ago talking about this, so I guess it's not new with Mojave.
https://apple.stackexchange.com/questio ... references

My old 2011 Mac Mini had the option to never sleep.

So, I'm not sure what's up with the new arrangement. Timers don't work very well if the computer is asleep. My setup is Insteon devices and I'm trying to get some devices to turn on and off at specific times. I had it working fairly well on the old Mac Mini.

Your computer won't sleep then and you definitely want it to be awake 24/7 when running Indigo.

Your computer won't sleep then and you definitely want it to be awake 24/7 when running Indigo.

+1 - this is how I have my development MacBook Pro set and it never goes to sleep (though the displays do). I assumed that removing the Computer slider was only on MacBooks but apparently not.

The Indigo Server application already tells macOS that it doesn't support power nap, but unchecking the box is probably the best course of action in any event.

by Redburga
Thanks. I changed the settings. Hopefully that fixes the problem.

by peszko
I have this problem with mac mini 2019. I run amphetamine to prevent this, but sometimes it crashes, and then I have issues connecting to indigo, and other strange things like connection issues with serial ports (dsc and indigo modem). I set the mac not to sleep other then the display, and have power nap off.

by Different Computers
If you're still having trouble with the computer going to sleep, at the command line you can do

by peszko
I think I might have figure out why mine insists on sleeping. I have it connected to a UPS including the USB cable, so the OS considered it self on battery (possibly a bug of how UPS reports its state). It seems that if the computer is on battery power, the OS is a lot more aggressive in sleeping. I disconnected the USB cable and will see if I get the sleeping again.
All times are UTC - 6 hours
Page 1 of 1
Powered by phpBB® Forum Software © phpBB Group
http://www.phpbb.com/