Scene Toggle is just as the name implies, lets you toggle on and off a scene. While this functionality exists in Indigo already by using virtual devices this plugin takes it a step further.

The scene device lets you choose which On/Off or Dimmable devices in your network that you want included in the scene. You set the devices to be off, on or the brightness you desire and the device takes a "snapshot" of the devices for the scene.

Other features of this allows you to execute action groups before and after turning the scene on or off (giving even more flexibility as to what you want your scenes to be) and optional live updating of your scene meaning if the scene is on and you change a device in the scene it will be saved at that state for the next time the scene is used.

The nice thing about this plugin is that you can activate multiple overlapping scenes easily. For example a movie scene may dim two lights and turn off the rest, while the intermission scene may turn the lights on and when you turn of intermission it will automatically restore back to the movie scene.

I have a few other features that are half-programmed in but not active at the moment like turning off the scene after X minutes and allowing you to change a light level while the scene is active and have that light level remain at that state when the scene is turned off - both experimental and works in progress.

The device supports On, Off and Toggle so you can easily create a single button on a control page to manage the scene and know if it's active or not.

Install according to the Indigo documentation.

Create a "Scene Device" for each scene you want to have. From there you select your devices to include, set the options and you are ready to go.

Select all of the devices to be included in the scene (command-click to select multiple items). You can save it like this and it will work or utilize the other options:

You can have multiple scenes active at the same time, each on will restore itself to the state you have configured. 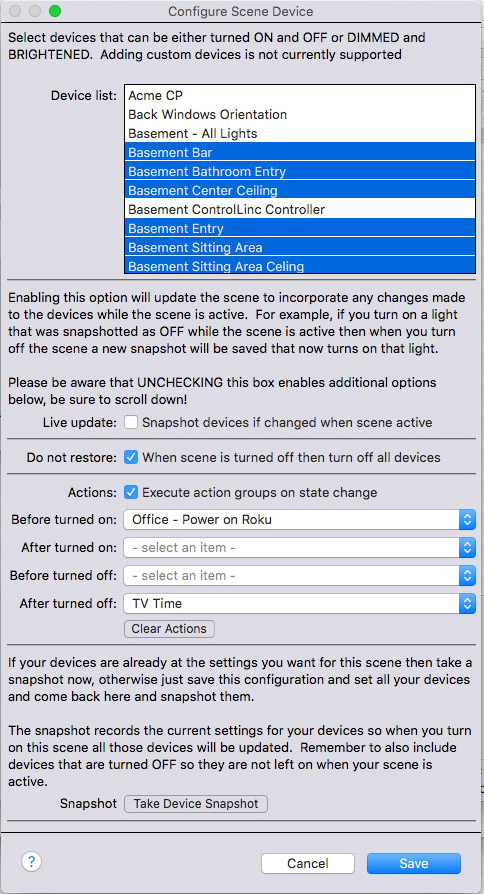 by jay (support)
Published. Thanks for another plugin contribution!

by howartp
Great plugin; will switch to it when I get time.


Sent from my iPhone using Tapatalk

by dz1rfj
Outstanding! Saved hours of logic development I realized I needed the night before when we had two lamps on under our deck turned on, and the dogs on the deck above us, tripped the nighttime motion to turn on the outside lights for the dogs to do their business....

Well, the dogs get only 10 minutes of light, because they are usually pretty quick to do their business, then all the lights turn off in the backyard, but these two lamps are part of that group, so our company was left in the dark.

Checked this forum, and Viola, problem solved. Works great! Many thanks

by Colorado4Wheeler
That's awesome, thanks for sharing your experience

by dz1rfj
HI - Quick question: Since this is not a normal on off device, is it possible to use this in a python script, and if so, what needs to be changed below:

by Colorado4Wheeler
It is a normal on/off device, so that command should work fine.

by dz1rfj
I was able to get it in my script, but I had to create two separate action groups to do it, then I executed the STORE or RESTORE (on or off) as needed.
The scene device does not seem to appear as an on off, there is no turn off or turn on button, or send status request button on the indigo dashboard, so I assumed it was not a normal on off device.

This would prevent me from having to create two action groups for each scene I create, and that would be great.

by Colorado4Wheeler
It's possible that I have an newer version, I have done some updates that I'll release soon. I thought I had released the version that converted it to an on/off but I could be mistaken. Regardless, a new version is coming out pretty soon.

by dz1rfj
Excellent, I'll look out for it

by brentb
I've recently purchased First Alert Onelink smoke and CO detectors, and the Insteon smoke bridge for use with them. I'd like to save the state of lighting, ventilation, and possibly door locks, when an 'alarm event' is triggered from smoke or CO, so I can issue commands to turn on all lighting, shut off the furnace fan, and unlock doors, then when an 'all clear' is issued somehow, I'd like to revert everything to its previous state.

Can this plugin do that?

by Colorado4Wheeler
As long as the devices you are referring to have On/Off and optionally Dim options available then it sounds like it will.

by colinpartridge
Am I correct in thinking that this plugin doesn't support virtual devices? Have been trying to toggle a virtual device, which appears in the device list, but doesn't toggle as expected with the other devices selected.

by Colorado4Wheeler
If the device support on/off command then it should. Does your virtual device work fine otherwise?
All times are UTC - 6 hours
Page 1 of 2
Powered by phpBB® Forum Software © phpBB Group
http://www.phpbb.com/